Learn from the women behind Manang’s Chicken and The Picture Co. at the 3rd Mompreneur Summit. 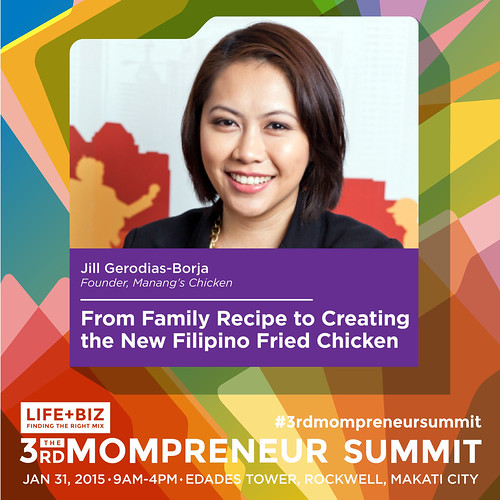 A CPA lawyer, Jill Gerodias-Borja ranked #16 in the 2007 graduating class of the Ateneo de Manila University. For a time, she worked at KPMG in Mountain View, California as an assurance associate, performing financial statement audits and reviews of various companies in Silicon Valley. She moved back to the Philippines in 2002, working in several enterprises while pursuing her law degree. In 2008, she established Hercules Financing Corporation, which focuses on real estate and business loans.

With her sister Jen Gerodias Slagle, a graduate of Le Cordon Bleu in Paris, she introduced the unique glazed fried chicken, a beloved family recipe, at Mercato Centrale in December 2010. It was an instant hit.

Jill is the president and CEO of Giabella Foods Corporation, which owns and operates Manang’s Chicken. Manang’s Chicken positioned itself as “ang bagong fried chicken ng Pinoy.” It now has 14 branches in a span of four years. 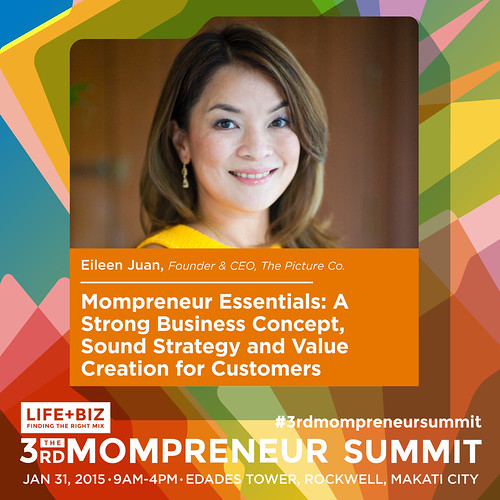 In 2002, Eileen Juan Grey was a new mom to two active boys. Wanting to capture their growing up years through photographs, Eileen came to an unfortunate realization: there just weren’t any photo studios catering to families and children. The one she eventually found was not only dark and uninviting, the photographers didn’t the know the first thing about interacting with children.

Eileen knew that there must be other moms faced with the same dilemma, and that’s how The Picture Company came about. At The Picture Company, Eileen and her crew create wonderful keepsakes for families in a fun, almost magical environment. It now has a network of nine studios in Metro Manila and Cebu, creating happy moments for families.

At the 3rd Mompreneur Summit, Janice Villanueva, founder of Mommy Mundo and Mompreneur Manila, will also be sharing interesting facts about the Filipino mompreneur today.